Fungi form their own Kingdom and are more closely related to animals than to plants. There are about 85,000 described species, but there may be as many as 1.5 million different fungi on earth. Fungi are identified on the basis of many characteristics. Often the differences are minute but important.

So what is a fungus?

While often overlooked, fungi are some of the most important inhabitants of the world, performing essential roles in all ecosystems. They decompose dead organic matter, are symbiotic partners for most plants and while most are terrestrial, some live in aquatic environments. If not for decomposer  fungi, the earth would be covered in vast amounts of plant and animal remains. 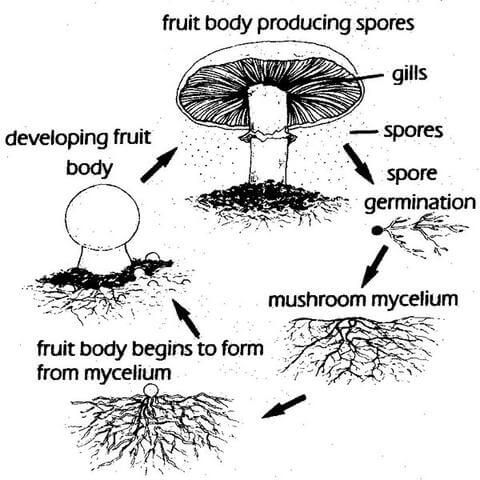 A hypha forms the fundamental structural unit of a fungus. Hyphae are thin, threadlike tubes that grow and elongate and spread over particular substrates. When these hyphae reach a food source, they release digestive enzymes to break down the matter into smaller molecules that can pass through the cell wall.  As the hyphae spread, they form a mass called a mycelium. One of the largest mycelia in the world belongs to the Armillaria ostoyae found in the Malheur National Forest in Oregon, United States. Also known as the “humungous fungus”, this creature covers an area of almost 2500 acres and is known as the largest living organism on the planet. Unlike a plant, a fungus cannot produce its own food and must obtain its nutrition from other sources. Many fungi form relationships with plant roots; this is called a mycorrhizal relationship.  The fungus supplies the plant with needed nutrients and water. The plant, in turn, supplies the fungus with sugars that the plant has produced by photosynthesis. This is why many fungi are found in the forest and, if one looks closer, similar types are fungi are found in association with similar types of trees.

Much of a fungus’ activity happens below ground, however when we take a stroll in the forest or a run in the park, we see what are known to many as mushrooms, which also serve an important purpose. Just like an apple is the fruiting body of an apply tree, a mushroom is the fruiting body of a fungus. When conditions such as nutrition and moisture are favorable, the mycelium produces these fruiting bodies with an intent of dispersing spores (essentially the “seeds” of the fungus). 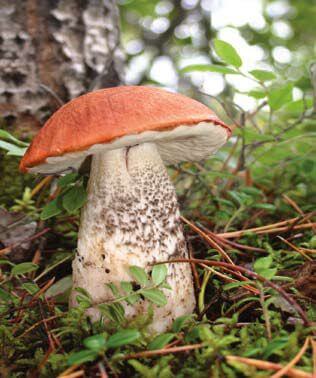 The ‘Red Cap’ or ‘Northern Roughstem’ Mushroom is a common inhabitant of forests in Alberta. It is a delicious edible summer mushroom and has been picked in Alberta for generations. While many mushrooms produce spores on bladelike gills, Leccinum boreale grows its spores in spongy pores below an orange to reddish cap. Its stem is whitish and covered with ornamentation, called scabers, that darken with age. The solid white flesh slowly turns pink, then grey, when cut. Leccinum boreale grows almost exclusively under poplars but mostly beneath trembling aspen (Populus tremuloides). It has a mutually beneficial mycorrhizal relationship with these trees. The tree uses the extensive mushroom network of “root-like” mycelium to obtain much-needed nutrients for growth.